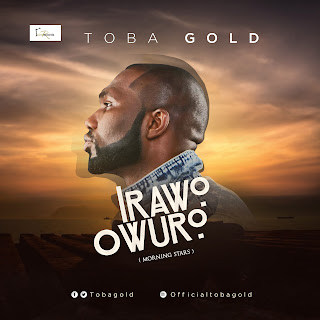 By Siji Oyewusi
Nigerian/American folk soul/ R&B singer, Toba Gold returns with a new single titled Irawo Owuro (Morning Star). The award winning artiste who made his first debut in 2008 has written and recorded songs like Jeje, Ekuro, Marry Me and more over the years of his career.
“Irawo Owuro” deepest reflection of human minds to positivity: dreams, hope and a new beginning.  After d darkest nights comes a glimmer of hope as the morning stars sparks up our world.  The singer, songwriter and producers music is influenced with a lot of soulful, jazzy and deep lyrical content about life and love.
Toba Gold earned a Bachelor’s degree in Clinical Biochemistry at Lagos State University and a Master’s degree in Healthcare Administration at the University of Maryland U.S.A. His love for music and creative art over the years has earned him a dynamic profile in entertainment business, international awards and notable media platforms globally. He also graduated from New York Film Academy as a film maker and cinematographer.
Irawo Owuro was composed by Toba Gold, produced by Teekaywitty, and the piano by Wole Oni who also mixed and mastered the song for Womp studio
Contact: tobagoldmusiconline@gmail.com
IG: @officialtobagold
Facebook & twitter: tobagold.